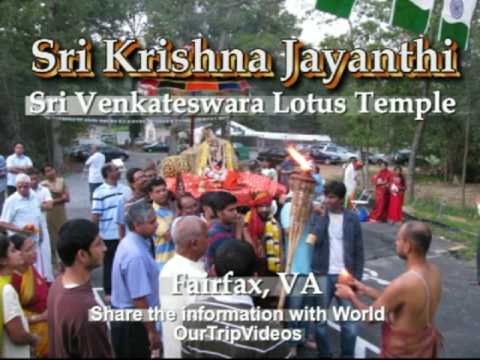 Procession of the Lord Krishna around the temple.

Krishna Janmashtami is observed on the 8th day, Ashtami. tithi, of the dark half or Krishna Paksha of the month of Bhaadra in the Hindu calendar, when the Rohini Nakshatra (called Aldebaran in the West) is ascendant.

Rasa lila or dramatic enactments of the life of Krishna are a special feature in regions of Mathura and Vrindavan, and regions following Vaishnavism in Manipur.

The festival always falls between Aug mid and Sept mid months of the Gregorian calendar.

The ritual is to fast the previous day (Saptami, 7th day), which is followed by a night-long vigil commemorating the birth of Krishna at night, and his immediate removal by his father Vasudeva to a foster-home for safe-keeping.

At midnight, the deity of the infant Krishna is bathed, placed in a cradle and worshipped.

The fast is completed after aarti, a special prayer.

In the early morning, ladies draw patterns of little childrens feet outside the house with rice-flour paste, walking towards the house.

This symbolizes the entry of the infant Krishna into his foster-home. This is performed to recreate incidents from the life of Krishna and commemorate his love for Radha.

While the Rasa Lila recreates the youthful Krishnas day, Govinda from all those present, teams of young men form human pyramids to reach the pot and break it.

The festival is thus celebrated with great joy and communal togetherness by one and all.

Janmaashtami, popularly known in Mumbai and Pune as Dahi Handi is celebrated with enormous zeal and enthusiasm.

Janmaashtami is popularly known in Manipur as Krishna Jarma is celebrated as a very big festival in two temples in Imphal, the capital city of Manipur.

First is the Govindaji temple and the second one is at the ISKCON. Varoius devotees of lord Krishna gather mostly on the ISKCON for the festival.