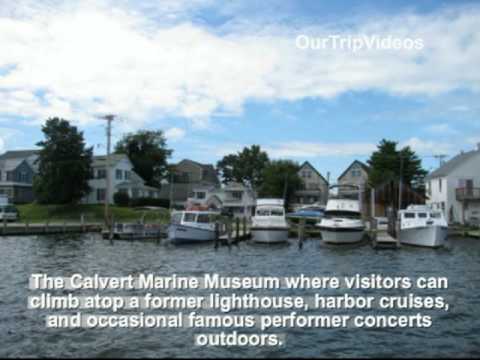 Solomons is a community and census-designated place (CDP) in Calvert County, Maryland, US. Solomons is considered a popular weekend destination spot amongst many living in the Baltimore-Washington Metropolitan Area.

Solomons Island is on the north side of the mouth of Patuxent River, where it meets the Chesapeake Bay. It is just across from the U.S. Patuxent River Naval Air Station.

Originally called Bournes Island (1680), then Somervells Island (1740), Solomons, also known as Solomons Island, takes its name from 19th century Baltimore businessman Isaac Solomon, who established a cannery there shortly after the Civil War. Solomons home still stands on the front of the island.

The Webster Family opened up a grocery store in the late 18th century. This profit combined with cheap land prices led to the Webster Family (Now Glascock) owning a high percentage of Solomons, MD.

In the 19th century, shipyards developed to support the islands fishing fleet. The Marsh Shipyard built schooners and sloops, but became famous for its bugeyes, the forerunner of the skipjack.


In the War of 1812, Commodore Joshua Barneys flotilla sailed from here to attack British vessels on the Chesapeake Bay. The deep, protected harbor has been a busy marine center ever since.

During World War II, the island was chosen by the Allied command as the site for training amphibious invasion forces.

The area had been a sheltered harbor, supporting a fishery. One of the fishermens shanties still remains, housing an exhibit on the Chesapeakes old-time fishing industry.

If you take the several trails through the wooded area, you are likely to meet woodchucks, rabbits, and racoons that inhabit the preserve. You can also see an occasional bald eagle, as well as ducks and other water fowl. Be on the lookout for bluebirds too.

The whole family may enjoy the day on the broad beach either swimming or hunting for sharks teeth that are regularly washed up on the shore.


Today, nature continues to play with the sand, changing the parks landscape with each tide, each storm, each season.

All the natural beauty of the Chesapeake Bay area comes to life. Visitors will discover a wide variety of native wildlife with quiet, close observation.


From early spring through the fall wildflowers such as Columbine, Blue Flag Iris (from which the park derives its name), and Rose-Mallow paint the landscape of Flag Ponds with an explosion of color.

A short, half-mile hike brings you to the sandy beach or you may take longer trail routes that allow you to experience the beauty of the park. Additionally there are observation platforms at two ponds, a fishing pier on the Chesapeake Bay and a visitors center with wildlife displays.

Flag Ponds Nature Park is also part of Marylands history. From the early 1900s until 1955 the area was a sheltered harbor on the Chesapeake Bay supporting a major "pound net" fishery supplying croaker, trout and herring to markets as far away as Baltimore. At one time, three shanties housed fishermen during the main fishing season. Known as "Buoy Hotel", only one shanty has survived over the years to remind us of the Flag Ponds fishing complex. The shanty houses a fascinating exhibit on the Bays old-time fishing industry.

Nestled on the Chesapeake Bays western shore, the Town of North Beach epitomizes "land of pleasant living." Its seven-block waterfront contains a public fishing pier and a half-mile-long boardwalk with accompanying bike path. The boardwalk is dotted with benches for residents and visitors to linger and Bay-watch. Located at the northern tip of Calvert County, North Beach also encompasses a wildlife refuge in its tidal marshlands, home to native wildlife and host to seasonal migrations.


Platted in 1900, North Beach celebrated its Centennial at the turn of the millennium. Socially and culturally, the Town has a rich and diverse history. Originally settled primarily by part-time residents from nearby Washington and Baltimore, North Beach provided an ideal site for vacation cottages, as well as for those of the Chesapeake Bays working watermen. When the Bay bridge opened in 1955 bringing easier access to the Atlantic Oceans resorts, summer crowds on the western shore soon dissipated, and the end of legalized gambling brought an end as well to the heyday of North Beach as a rollicking resort.


North Beach is home to the Bayside History Museum. Located in one of the oldest houses in Town, the museum recently celebrated its third birthday. Other recent developments in the Town include a senior citizens apartment complex opened for occupancy in 2001 and a primary care medical facility opened in 2002. Visitors flock to North Beach each June to the North Beach House and Garden Club Tour and in August for the Towns annual Bayfest. Local antique stores attract shoppers, while beachcombers delight in the search for fossil sharks teeth. Mother Nature herself is the Towns greatest asset.

Todays population is composed primarily of year-round residents who know theyve found "The Jewel of the Chesapeake Bay". Its a place to take a quiet, friendly walk around Town away from the congestion and hassle of the city, a place where government wears the face of ones neighbor and each resident can keep a finger on its pulse and a place to call your own little bit of heaven on earth.


Herrington Harbor (Rose Haven) resort, which was voted the best marina in the United States, is located 2 miles north of North Beach, across the County line.

North Beach was a gambling mecca for summer visitors from the Washington, D.C. area during the 1940s. In the 1960s to 1970s it became a destination for motorcycle gangs.

Revitalization began in the 1980s, and escalated in the 1990s. Tropical Storm Isabel destroyed many of the waterfront homes and boardwalk in 2003. Since then, the waterfront of North Beach has been rebuilt with multi-story homes and a condominium. North Beach currently has no gambling venues, other than MD Lottery sales.

The Chesapeake Beach Water Park opened in the summer of 1995 to serve the local community with more splashin fun. Eight water slides, fountains, waterfalls, a lagoon, kids activity pool, and more to treat everyone to a cool time.

Located on the grounds of Calvert High School and the site of the original Storer land, the planetarium offers educational programs about our night sky.

These popular programs are free and are held throughout the school year on the first and third Friday evenings of the month. They are informative, entertaining, and the seats are very comfortable.