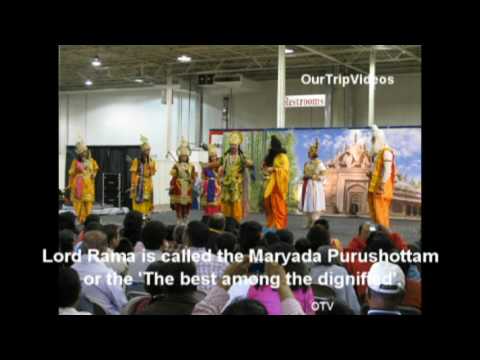 The Ram Leela Performed Live - Over 65 actors and actresses will perform the Ram Leela live on stage. Choreographed by Bollywood actress Padma Khanna! By Padma Khanna and Jagdish Sidana with over 65 artists(Indianica Academy, NJ).

Ram Leela(Ramayana), Chantilly, VA, US - Victory of Good Over Evil.

Ramlila (literally Ramas lila or play) is a dramatic folk re-enactment of the life of Lord Ram, ending up in 10 day battle between Lord Ram and Ravan, as described in the Hindu religious epic, the Valmikis Ramayana.

A tradition that originates from the Indian subcontinent, the play is staged annually often over ten or more successive nights, during the auspicious period of -Sharad Navratras-, which marks the commencement of the Autumn festive period, starting with the Dussehra festival.

On the festival of Vijayadashami day, the victory of Lord Ram over demon king Ravana, the actors are taken out in a procession through the city, leading up to a mela ground or town square, where the enactment of the final battle takes place, before giant effigies of Ravana, his brother Kumbhakaran and son Meghanath are set fire, and coronation or abhisheka of Rama at Ayodhya takes place, marking the culmination of festivities and restoration of the divine order.

Rama is the 7th incarnation of Vishnu and central figure of the Ramayana. The Ramayana is based on the life, times and values of Lord Rama. Lord Rama is called the Maryada Purushottam or the - The best among the dignified. The story of Lord Rama and his comrades is so popular in India that it has actually amalgamated the psyche of the Indian mainstream irrespective of their religion. The very story of Ramayana injects ethics to the Indian mainstream.

Most Ramlilas in North India are based on the 16th century Avadhi version of Ramayana, Ramacharitamanas, written by Gosvami Tulsidas.

The open-air productions are staged by local Ramlila committees, Samitis, and funded entirely by the local population, the audience.

It is close to the similar form of folk theatre, Rasa lila, which depicts the life of Krishna.

Ramlila has received considerable global attention, especially amongst the Indian diaspora community, and regions where Hinduism has spread over the centuries, like Africa and several South East Asian countries.

UNESCO proclaimed the tradition of Ramlila a Masterpiece of the Oral and Intangible Heritage of Humanity in 2005.

Subsequently, Govt. of India and IGNCA produced a two hour documentary, titled Ramlila - The traditional performance of Ramayana for UNESCO, on Ramnagar Ramlila, and Ramlila traditions of Avadh, Braj and Madhubani, and that of Ayodhya, which assimilates elements of all three.

Another unique Ramlila, is being staged since 1972, at Bakshi Ka Talab, about 20 km from Lucknow, where lead characters like Rama, Lakshman and Hanuman are played by Muslim youths.


Historically it is believed that first Ramlila shows were staged by Megha Bhagat, one of the disciples of Tulsidas, the author of Ramacharitamanas in about 1625 AD.

Some scholars believe its first appearance somewhere between 1200 and 1500 AD.