Page:    Pictures 1 to 0 of 0
America East to West. We visit, We record, We present, You Enjoy! More
* These are 11 yrs old memories. People may change, feelings & memories don’t * 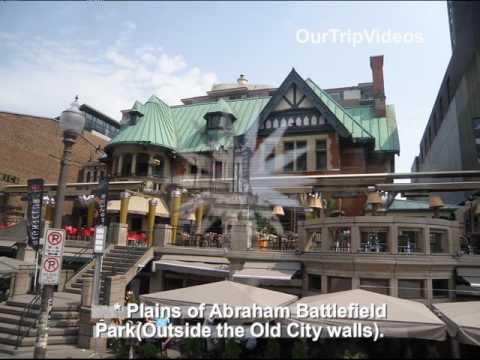 Quebec City is the capital of the Canadian province of Quebec. Located at a commanding position on cliffs overlooking the St. Lawrence Seaway, Quebec Citys Old Town is an UNESCO World Heritage Site and the only city in North America outside Mexico with its original city walls.

Quebec was first settled by Europeans in 1608 in a abitation led by Samuel de Champlain and celebrated its 400th anniversary in 2008.

Founded by the French to make a claim in the New World, the name Quebec originally referred to just the city. It is an aboriginal word for where the river narrows as the St. Lawrence River dramatically closes in just east of the city.

The French lost the city and its colony of New France to the British in the Battle of the Plains of Abraham in 1759.

Walking is a great way to get around the Old Town The compact layout makes distances short.You will see beautiful old buildings and little vistas around every corner. You will get exercise. Do be careful of uneven cobblestones and narrow streets, though.

Cote de la Montagne is a steep, winding street that connects Upper Town and Lower Town. If you get tired, use the Funiculaire to go between the upper and lower parts of the Old Town. $2 will get you from near the base of the Breakneck Stairs (lEscalier Casse-Cou) back up to the front of the Chateau Frontenac.

Quebec Citys main sight is the Old Town, the upper part of which is surrounded by a stone wall built by both French and British armies.

* Chateau Frontenac. Quebec City icon. Claimed to be the most photographed hotel in North America.

* Dufferin Terrace. Boardwalk situated alongside (east of) the Chateau Frontenac, and offers a grand view of the St. Lawrence river.

* Observatoire de la Capitale(Outside the Old City walls) One of the tallest buildings in Quebec, offering a panoramic view of the whole city.

* AML Cruises. Offers short three-hour cruises on the St-Lawrence river leaving from the docks nearby the ferry.
* Horse-drawn carriages. A one-hour tour of the Old City.
* Ferry to Levis - Beautiful views of the Chateau Frontenac and the Lower Old Town, and the other side of the river.
* Cross-country skiing and snowshoeing on Plains of Abraham
* Villages Vacances Valcartier
* Mont-Sainte-Anne
* Governeurs Walk
* Station touristique Stoneham
* All restaurants in the Old City will post menus out front in French and in English.