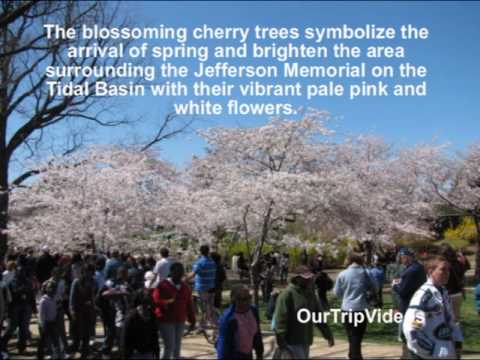 The National Cherry Blossom Festival is a spring celebration in Washington, D.C. commemorating the March 27, 1912, gift of Japanese cherry trees from Mayor Yukio Ozaki of Tokyo to the city of Washington.

Mayor Ozaki donated the trees in an effort to enhance the growing friendship between the United States and Japan and also celebrate the continued close relationship between the two nations.

In a ceremony on March 27, 1912, First Lady Helen Herron Taft and Viscountess Chinda, wife of the Japanese ambassador, planted the first two of these trees on the north bank of the Tidal Basin in West Potomac Park.

By 1915 the US government had responded with a gift of flowering dogwood trees to the people of Japan.

In 1994 the Festival was expanded to two weeks to accommodate the many activities that happen during the trees blooming.

Today the Festival is coordinated by the National Cherry Blossom Festival, Inc., an umbrella organization consisting of representatives of business, civic, and governmental organizations.

More than 700,000 people visit Washington each year to admire the blossoming cherry trees that herald the beginning of spring in the nations capital.

The two-week festival is kicked off with an opening ceremony, followed by an array of activities and cultural events.

Every day there is a sushi/sake celebration, classes about cherry blossoms, and a bike tour of the Tidal Basin.

The Cherry Blossom 10-Mile Run is held as part of the festival on the first Sunday in April.

The blossoming cherry trees symbolize the arrival of spring and brighten the area surrounding the Jefferson Memorial on the Tidal Basin with their vibrant pale pink and white flowers.

On the last Saturday of the festival, there is the Parade of the National Cherry Blossom Festival, followed by the Sakura Matsuri-Japanese Street Festival, a celebration of Japan presented by the Japan-America Society of Washington, D.C.

The Smithsonian Kite Festival is held as the beginning of the festival on the last Saturday of March.