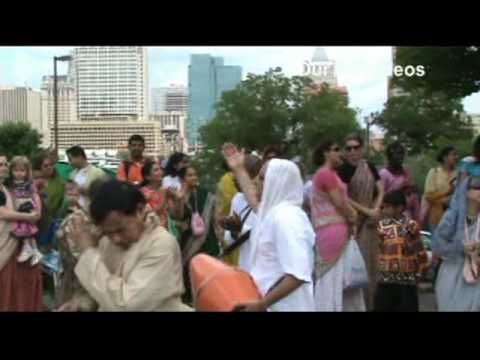 ISKCON(The International Society for Krishna Consciousness) was established in 1966 by His Divine Grace A.C. Bhaktivedanta Swami Prabhupada (Srila Prabhupada). ISKCON has since developed into a worldwide confederation of over 10,000 resident devotees and over 1,000,000 congregational members worldwide.

Better known as the Hare Krishna movement, ISKCON is comprised of more than 350 centers, 60 rural communities, 50 schools and 60 restaurants worldwide.

The ISKCON Baltimore Rathayatra, Festival of India held at the Science Center (Inner Harbor) at 12:00 noon and proceed down Light St to McKeldin Square (corner of Light and Pratt Streets) where the Festival Of India tents and booths were set up for the remainder of the day untill 7 pm.

Garage Parking is available right across from McKeldin Square, there is also plenty of street parking both metered and free within a few blocks of the festival site.

This event includes Baltimores Seventh Annual Rathayatra, the 2,000-year-old Parade of Chariots, and the Festival of India, a colorful display of culture, music, art, spirituality, and vegetarian food.

This day is sponsored by the ISKCON, a non-profit organization that promotes the well-being of human society by teaching spiritual principles and values the event is expected to draw several thousand people and is a day of fun and education for the entire family.

Thousands of plates of sacred food and hundreds of spiritual books are distributed to passersby, who also get an opportunity to view the Festival of India exhibits and experience Vedic drama and dance, chanting of the Hare Krishna mantra and other spiritually uplifting presentations.


Ratha Yatra, the Festival of The Chariots, originates in Jagannatha Puri in Orissa on the North Eastern coast of India where it is still observed by the entire population.

The main event is the enthronement of 3 large deities - Jagannatha (Krishna), His brother Balarama and their sister Subhadra - each onto Their own wooden chariot. These three huge chariots are then hauled by ropes held by hundreds of their devotees along a parade route lined by admirers, worshippers and spectators.

The carved and colourfully-painted chariots, liberally bedecked with flowers and garlands, are accompanied by enthusiastic kirtana (congregational chanting) sung by tens of thousands of devotees. After the procession there is, as at all Vaisnava festivals, a large feast of Krishna prasadam for all participants.

The deities who grace the chariots are kept throughout the year within temples where They are worshipped daily in a regulative way. But once a year They emerge in order that the public may see Them. Krishna thus presents Himself as Jagannatha, the Lord of the Universe (from which we get the English word -Juggernaut- meaning a large truck or chariot).

Over the last 30 years Ratha Yatra has been introduced into many cities around the world such as New York, London and Sydney by ISKCONs founder, Srila Prabhupada, and his followers. As an outdoor street festival it never fails to attract the attention of the public and media and has become a much loved and appreciated event in many urban calendars to the delight of members of ISKCON.

Krishna is a deity worshiped across many traditions in Hinduism in a variety of perspectives.

While many Vaishnava groups recognize him as an avatar of Vishnu, other traditions within Krishnaism consider Krishna to be svayam bhagavan, or the supreme being.

The stories of Krishna appear across a broad spectrum of Hindu philosophical and theological traditions.

They portray him in various roles: a god-child, a prankster, a model lover, a divine hero and the Supreme Being.

The Bhagavad Gita (Song of God) is an important Sanskrit Hindu scripture.

It is revered as a sacred scripture of Hinduism, and considered as one of the most important religious classics of the world.

The Bhagavad Gita is a part of the Mahabharata, comprising 700 verses. The teacher of the Gita is Lord Krishna.

The content of the Gita is the conversation between Krishna and Arjuna taking place on the battlefield before the start of the Kurukshetra war.

Responding to Arjunas confusion and moral dilemma, Krishna explains to Arjuna his duties as a warrior and prince and elaborates on different Yogic and Vedantic philosophies, with examples and analogies.