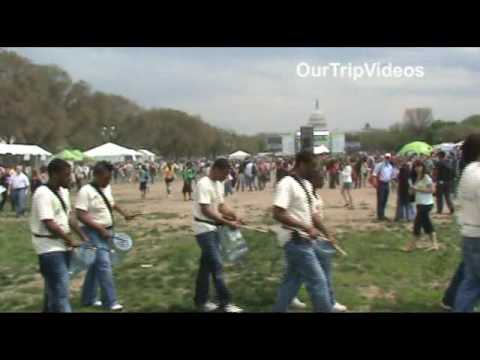 Earth Day, celebrated April 22, is a day designed to inspire awareness and appreciation for the Earths environment.

It was founded by U.S. Senator Gaylord Nelson (Wisconsin) as an environmental teach-in in 1970 and is celebrated in many countries every year.

The United Nations celebrates an Earth Day each year on the March equinox, a tradition which was founded by peace activist John McConnell in 1969.

Illumination of the Earth by the Sun on the day of an equinox (ignoring twilight).

April 22, 1970, Earth Day marks the beginning of the modern environmental movement. Approximately 20 million Americans participated, with a goal of a healthy, sustainable environment.

Mobilizing 200 million people in 141 countries and lifting the status of environmental issues onto the world stage, Earth Day on April 22 in 1990 gave a huge boost to recycling efforts worldwide and helped pave the way for the 1992 United Nations Earth Summit in Rio de Janeiro.

The April 22 Earth Day in 2000 combined the big-picture feistiness of the first Earth Day with the international grassroots activism of Earth Day 1990.

Earth Day 2000 sent the message loud and clear that citizens the world round wanted quick and decisive action on clean energy.

Earth Day 2007 was one of the largest Earth Days to date, with an estimated billion people participating in the activities in thousands of places.

Founded by the organizers of the first April 22 Earth Day in 1970, Earth Day Network promotes environmental citizenship and year round progressive action worldwide.

Earth Day Networks international network reaches over 17,000 organizations in 174 countries, while the domestic program engages 5,000 groups and over 25,000 educators coordinating millions of community development and environmental protection activities throughout the year.

Earth Day is the only event celebrated simultaneously around the globe by people of all backgrounds, faiths and nationalities.

More than a half billion people participate in Earth Day Network campaigns every year.

Ecology Flag with theta - the Ecology Flag was created by cartoonist Ron Cobb, and was published for the first time in October 25, 1969.

Criticisms of Earth Day
Some environmentalists have become critical of Earth Day, particularly those in the bright green environmentalism camp. They charge that Earth Day has come to symbolize the marginalization of environmental sustainability, and that the celebration itself has outlived its usefulness.

Many cities extend the schedule of Earth Day observance events to be an entire week, usually starting on April 16, and ending on Earth Day, April 22.

Use the ENERGY STAR program (energystar.gov) to find energy efficient products for home.

Turn off appliances and lights when we leave the room. Use the microwave to cook small meals.

Use a programmable thermostat to save on heating and cooling costs when youre not home.

Look for the WaterSense label to identify water-efficient products and programs.

Scrape, rather than rinse, dishes before loading into the dishwasher; wash only full loads.

Water the lawn or garden during the coolest part of the day (early morning is best).

Keep yard healthy - dethatch, use mulch, etc. Sweep outside instead of using a hose.

Reduce/reuse/recycle - Practice the 3 Rs: reduce how much we use, then reuse what we can, and then recycle the rest.

Handle toxics properly - Whats under kitchen sink, in garage, in bathroom, and on the shelves in laundry room?

Commute for the environment.

Start a carpool or walk, bike, or use mass transportation instead of driving.

Encourage our employer to be a - Best Workplace for Commuters. Learn how every trip we take can affect air quality.

Use Energy Stars energy-efficient office products. Make sure that you turn on the energy saving features.
Turn off computer monitor, printers, copy machines, and the lights when they are not being used.

If possible, take the stairs instead of using the elevator.

A Tree for Peace.
Global Warming; Global Warning.
Only One Earth, Care and Share.

One Earth One Family.
We the Peoples: United for the Global Environment.
Our Earth, Our Habitat, Our Home.

For Life on Earth - Save Our Seas.

Connect with the World Wide Web of Life.

Kick The Habit - Towards A Low Carbon Economy.