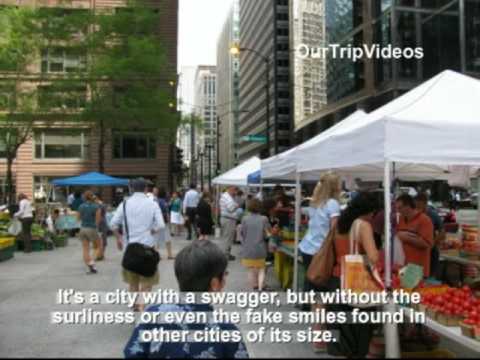 Chicago is the home of the blues and the truth of jazz, the heart of comedy and the idea of the skyscraper. Here, the age of railroads found its center, and airplanes followed suit. Butcher of hogs and believer in progress, it is one of the worlds great cities, and yet the metropolitan luxuries of theater, shopping, and fine dining have barely put a dent in real Midwestern friendliness. Its a city with a swagger, but without the surliness or even the fake smiles found in other cities of its size.

As the hub of the Midwest, Chicago is easy to find - its picturesque skyline calls across the waters of Lake Michigan, a first impression that soon reveals world-class museums of art and science, miles of sandy beaches, huge parks and public art, and perhaps the finest downtown collection of modern architecture in the world.

With a wealth of iconic sights and neighborhoods to explore, theres enough to fill a visit of days, weeks, or even months without ever seeing the end. Dress warm in the winter, and prepare to cover a lot of ground: the meaning of Chicago is only found in movement, through subways and archaic elevated tracks, in the pride of tired feet and eyes raised once more to the sky.


Weather is definitely not one of the attractions in Chicago. The months from December to March will see very cold temperatures, with even more bitter wind chill factors.


Chicago was known as a fine place to find a wild onion if you were a member of the Potawatomi tribe, who lived in this area of Illinois before European settlers arrived.

As every road had once led to Rome, every train led to Chicago. Carl Sandburg called Chicago the Hog Butcher for the World for its cattle stockyards and place on the nations dinner plate.

Chicago is also known as The Second City, which refers to its rebuilding after the fire - the current city is literally the second Chicago, after the one that disappeared in 1871. It can also refer to the citys long-held position as the United States second largest city, after New York City, although it has since been surpassed in population by Los Angeles.

Chicago is known as The Windy City(winds off Lake Michigan).

Finally, the city is known as the The City That Works, which refers to Chicagos labor tradition and the long hours worked by its residents, its willingness to tackle grand civic projects and to make fortunes for a lucky few.

Oak Street Beach and North Avenue Beach (in the Near North and Lincoln Park) are the fashionable places to sun-tan and be seen, but Rogers Park has mile after mile of less pretentious sand and surf.


#Navy Pier, located just east of Streeterville, is 3,000 ft (910 m) long and houses retail stores, restaurants, museums, exhibition halls and auditoriums. Its 150-foot (46 m) tall Ferris wheel is one of the most visited landmarks in the Midwest, attracting about 8 million people annually.
http://www.navypier.com/

#Millennium Park is an award-winning center for art, music, architecture and landscape design. The result of a unique partnership between the City of Chicago and the philanthropic community, the 24.5-acre Park features the work of world-renowned architects, planners, artists and designers.
http://www.millenniumpark.org/

#Willis Tower/Sears Tower
A triumph of ingenuity and innovation, Willis Tower stands tall on the Chicago skyline.
With comprehensive security networks and a wide range of top-quality amenities, Willis Tower is an ideal location for business.
http://www.willistower.com/

Standing at 1,450 feet and 110 stories high, Willis Tower is the tallest building in the western hemisphere. Offering more than 3.8 million square feet of office and retail space, Willis Tower is THE business location in Chicago.

# Comiskey Park - Winning the citys first World Series in nearly a century helped earn some acceptance for the -U.S. Cellular Field- (The Cell) moniker, but its still regarded as profanity by the old-timers in Bridgeport, where the first Comiskey Park was built in 1910.

# Hollywood Beach - The favorite beach of Chicagos GLBT community was renamed Kathy Osterman Beach for one of the mayors Edgewater based political cronies, but more than a decade later, only city signage knows it by that name.


A CTA bus - note the number/destination and symbol for wheelchair accessibility
Hold on to your baby carriages in Union Station!
Lake Shore Drive next to Burnham Park on the South Side.
Chicago Harbor Lighthouse
The legendary Chicago Theatre
View of the Chicago L tracks in the Loop from Wabash Avenue
Devon Street in Chicago

#The Field Museum and Underground Adventure
The world-renowned Field Museum is an unforgettable experience for visitors of all ages. Meet Sue, the largest, most complete T. rex ever found - explore an ancient Egyptian tomb - and much more. Youll discover the astonishing diversity of life on Earth and connect with cultures from every corner of the globe. Also enjoy an unbeatable view of Lake Michigan and Chicagos downtown skyline.
http://www.fieldmuseum.org/