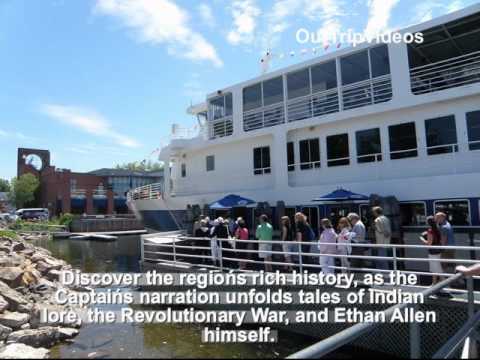 Burlington is the largest city in the state of Vermont. Situated on Lake Champlain, it is the heart of a small urban area that acts as Vermonts vibrant and cosmoplitan center. Known for its ultra-liberal environment and free-thinking spirit, Burlington is both a college town and an important commercial city, while maintaining an intimate atmosphere.

Vermont Teddy Bear factory is open year-round (7 days a week) except Easter, Thanksgiving, Christmas, & New Years Day. Its one of the most popular Vermont activities! Plan to spend about 1 hour on-site. When you visit Bear Shop, you can send a teddy bear through Teddy Express Delivery Service.

The best way to enjoy the lake is with a cruise aboard the 424 passenger Spirit of Ethan Allen III. Discover the regions rich history, as the Captains narration unfolds tales of Indian lore, the Revolutionary War, and Ethan Allen himself. Explore the depths of the shoreline as the ship cruises alongside the lakes unique geographic formations. Savor the majestic beauty of the Adirondack and Green Mountain ranges that surround the lake.

* The largest freshwater lake in the U.S. after the five Great Lakes.
* The only one of a few lakes that flows in a northerly direction.
* It is 12.2 miles wide, 120 miles long, and 427 feet deep at its deepest point. It encompasses Vermont, New York, and the Province of Quebec, Canada.
* It is believed to have the best collection of historic shipwrecks in North America.
* Samuel de Champlain discovered the lake in 1609.
* Keep your eyes open for Champ, our friendly lake monster!

* Downtown Burlington is home to an eclectic mix of shops and restaurants, and is well-known for its pedestrian Church Street Marketplace.

* People - Burlington is ideal for observing all sorts of individuals.

* Waterfront - At the bottom of College street.


The Canadian border and Montreal, Quebec, is less than a 2 hour drive north. Be advised that due to recent changes, border crossing between the US and Canada now require a passport/Green Card or enhanced identification (such as Vermont states Enhanced Drivers License, or EDL).