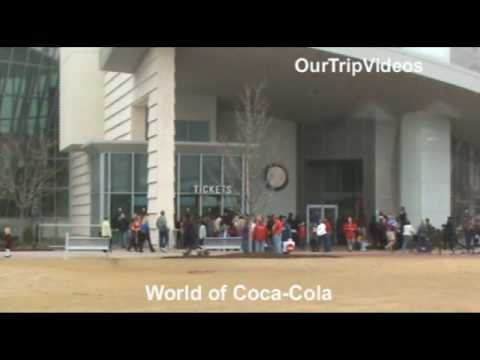 Atlanta is the capital and the largest city in the US state of Georgia, and the core city of the 9th most populous US metropolitan area

The land comprising the city of Atlanta was once an American Indian village called Standing Peachtree.

During the American Civil War, Atlanta served as an important railroad and military supply hub. In 1864, the city became the target of a major Union invasion.

Atlanta sits atop a ridge south of the Chattahoochee River. Atlanta has a humid subtropical climate, with hot, humid summers and mild, but occasionally chilly winters by the standards of the US.

The new World of Coca-Cola, features the history of the world-famous soft drink brand and provides visitors the opportunity to taste different Coca-Cola products from around the world. Pemberton Place parking garage for a fee of $10 per day.

Underground Atlanta, a historic shopping and entertainment complex lies under the streets of downtown Atlanta.

The Varsity has been an Atlanta landmark for over 75 years. Just east of the city rises Stone Mountain, the largest piece of exposed granite in the world.

One of 7 American cities classified as Gamma world cities, Atlanta ranks 3rd in the number of Fortune 500 companies headquartered within city boundaries.

Delta operates one of the worlds largest airline hubs at Hartsfield-Jackson Atlanta International Airport and, together with the hub of competing carrier AirTran Airways.

The CNN Center is the world headquarters of the Cable News Network (CNN). The main news rooms and sets for the anchors of several of CNNs news channels are located in the building. The CNN Center opened in 1976 as the Turner Center. The atrium escalator that is used to transport visitors on the CNN tour has been listed in the Guinness Book of World Records as the longest freestanding escalator in the world.


The other attractions are :