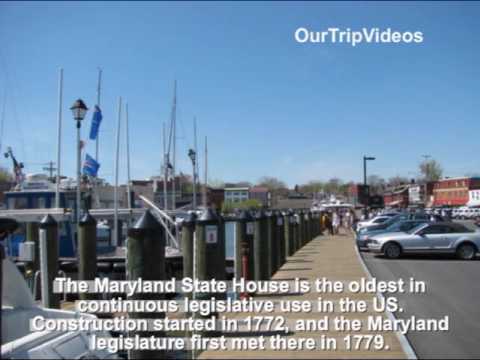 Annapolis is the capital of the U.S. state of Maryland is situated on the Chesapeake Bay at the mouth of the Severn River.

Annapolis is part of the Baltimore-Washington Metropolitan Area.

The city was the temporary capital of the US in 1783-1784 and the site of the Annapolis Peace Conference, held in November 2007, at the US Naval Academy.

In 1694, Sir Francis Nicholson moved the capital of the royal colony there and named the town Annapolis after Princess Anne, soon to be the Queen of Great Britain; it was incorporated as a city in 1708

From the middle of the 18th century until the American Revolutionary War, Annapolis was noted for its wealthy and cultivated society.


The Maryland Gazette, an important weekly journal, was founded there by Jonas Green in 1745; in 1769 a theatre was opened; during this period also the commerce was considerable, but declined rapidly after Baltimore, with its deeper harbor, was made a port of entry in 1780.

Water trades such as oyster-packing, boatbuilding and sailmaking became the citys chief industries.

Currently, Annapolis is home to a large number of recreational boats that have largely replaced the seafood industry in the city.

The Maryland State House is the oldest in continuous legislative use in the United States. Construction started in 1772, and the Maryland legislature first met there in 1779.

The United States Naval Academy was founded in 1845 on the site of Fort Severn, and now occupies an area of land reclaimed from the Severn River next to the Chesapeake Bay.


The Armel-Leftwich Visitor Center is conveniently located on the United States Naval Academy, just inside Gate 1 at the end of King George Street.

You will need a photo ID to walk onto the yard.

The Visitor Center houses the USNA Gift Shop and Guide Service providing visitors with the official USNA shopping experience and a chance to tour the yard.

The USNA Guide Service provides public walking tours throughout the year so you can experience "Life on the Yard".

Catch Noon Meal Formation as the Brigade forms for uniform inspection before lunch.

The Visitor Center is the first stop on any visit to the undergraduate college of the U.S. Navy.

Information specialists welcome visitors to view a 12 minute film and take a guided walking tour of the yard with a professional, certified guide.

The walking tour takes approximately one hour and 15 minutes.

All day parking is available at the Navy-Marine Corps Stadium, Rowe Blvd., with free shuttle service to Annapolis City Dock.

The William Paca Garden is a two-acre oasis of natural beauty and artful elegance in the heart of city.

The Maryland State House is the oldest in continuous legislative use in the US.

The Hammond-Harwood House is one of the most important colonial houses in America.

The Chase-Lloyd House in Annapolis, Maryland is a brick three-story Georgian mansion dating from 1769-1774 with interiors by William Buckland.