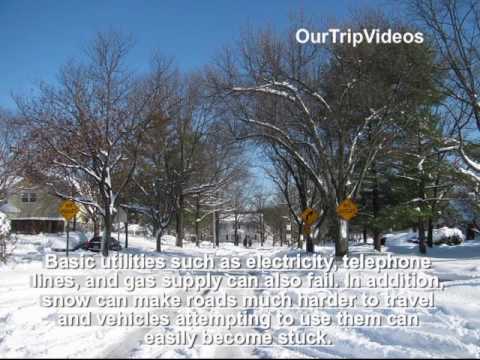 Snow is a type of precipitation within the Earths atmosphere in the form of crystalline water ice, consisting of a multitude of snowflakes that fall from clouds. Snowflakes come in a variety of sizes and shapes. The process of precipitating snow is called snowfall.

When powdery, snow moves with the wind from the location where it originally landed, forming deposits called snowdrifts which may have a depth of several meters.

The existence of a snowpack keeps temperatures colder than they would be otherwise, as the whiteness of the snow reflects most sunlight, and the absorbed heat goes into melting the snow rather than increasing its temperature.

The term snow storm can describe a heavy snowfall while a blizzard involves snow and wind, obscuring visibility. Snow shower is a term for an intermittent snowfall, while flurry is used for very light, brief snowfalls.

When snow falls in significant quantities, travel by foot, car, airplane and other means becomes highly restricted, but other methods of mobility become possible: the use of snowmobiles, snowshoes and skis.

When heavy snow occurs early in the fall, significant damage occurs to trees still in leaf.


Snowfalls intensity is determined by visibility. When the visibility is over 1 km (0.62 mi), snow is considered light. Moderate snow describes snowfall with visibility restrictions between 0.5 and 1 km.

Heavy snowfall describes conditions when visibility is less than 0.5 km. Steady snows of significant intensity are often referred to as snowstorms. When snow is of variable intensity and short duration, it is described as a snow shower. The term snow flurry is used to describe the lightest form of a snow shower.

A blizzard is a weather condition involving snow which has varying definitions in different parts of the world. In the US, a blizzard is occurring when 2 conditions are met for a period of 3 hours or more: A sustained wind or frequent gusts to 35 miles per hour (56 km/h), and sufficient snow in the air to reduce visibility to less than 0.4 kilometers (0.25 mi).

Substantial snowfall can disrupt public infrastructure and services, slowing human activity even in regions that are accustomed to such weather. Air and ground transport may be greatly inhibited or shut down entirely. Populations living in snow-prone areas have developed various ways to travel across the snow, such as skis, snowshoes, and sleds pulled by horses, dogs, or other animals and later, snowmobiles. Basic utilities such as electricity, telephone lines, and gas supply can also fail. In addition, snow can make roads much harder to travel and vehicles attempting to use them can easily become stuck.

Accumulated snow is removed to make travel easier and safer, and to decrease the long-term impact of a heavy snowfall. This process utilizes shovels, snowplows and is often assisted by sprinkling salt or other chloride-based chemicals, which reduce the melting temperature of snow.

Many winter sports, such as skiing, snowboarding, snowmobiling, and snowshoeing depend upon snow.


The snow piles from the recent snowstorm have nearly all melted, but the costs of plowing local streets and highways are still mounting for local transportation agencies, already hitting more than $41 million.

The Maryland State Highway Administration has surpassed its $26 million budget for the entire year, with $20 million in expenses from the recent snowstorm. The snow plowing and road treatments a necessary but expensive proposition.

The Dec. 18 and 19 snowstorm hit before winter officially began. With snow totals hitting as high as 24 inches in Bethesda, the storm paralyzed the region.

Virginia Department of Transportation said the storm was by far the worst to happen so early. Weve had Decembers that are difficult. Sometimes weve had winters that didnt start until January, In 20 years, theres never been a storm like this. Not in December.


* The County clears County-maintained residential roadways and primary/arterial roadways.
* Municipalities in the County, clear their own streets.

* The Maryland State Highway Administration clears all numbered routes such as Georgia Avenue (MD Route 97) in the County.

* If there is 3 or more inches of snow on the roads - All major County roads and primary neighborhood streets get plowed, salted, and cleared while it is snowing.

* When the snowfall ends -
- Plow all major County roads and primary neighborhood streets and clear to bare pavement.
- Plow all Residential Streets with at least one pass and spot sand when necessary.
- Spread abrasives on hills, intersections on residential streets, and on roads around schools.
- Clear drainage structures to ensure positive drainage.
* Snow emergency route - Prominent red and white signs designate certain roads as snow emergency routes that are kept clear throughout storms for police, fire, and other emergency vehicles.

* When the State or County designates a snow emergency, it is illegal on snow emergency routes to drive without snow tires, mud/snow radials or chains or park on these roads.

* Property owners are responsible for clearing their public sidewalks, driveways and entrances within 24 hours of the end of a snowstorm. All residents are strongly encouraged to be good neighbors by clearing the sidewalks in front of their homes, as well as assisting those who may not be physically able to do so.

* If you need help clearing our sidewalk - Snow shoveling services for a fee are listed through a web search or through the yellow pages (landscaping and maintenance services).

* If a snow plow damaged your mailbox - The County may install a standard post and mailbox at your residence as soon as they have finished all snow plowing.

* We recommend parking your car in the driveway, if you have one. They can do a much better job clearing your street of snow without maneuvering around parked vehicles. Unfortunately, there is little their plow operators can do to keep snow away from your driveway entrance or parked cars.